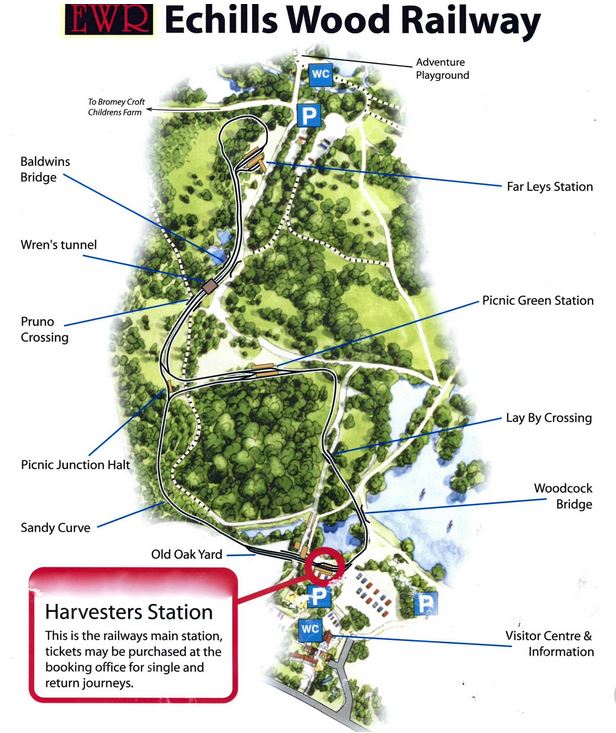 Map of the railway 10 years after relocation to Kingsbury

The railway’s name was taken from Echills Wood near Stoneleigh in Warwickshire where it originated with the settlement of Echills Wood going back over a thousand years with a record in the Doomsday Book. The railway itself enjoys a somewhat shorter history stretching back only over only forty years with its move to Kingsbury Water Park in the early part of 2004 and the first steam hauled passenger trains commencing at Easter of 2006.

Since relocating to Kingsbury the railway has grown considerably in size. With the provision of comprehensive maintenance and engineering workshops, the railway has an infrastructure to operate a wide range of engines and rolling stock to carry the general public safely and in comfort.

The railway now has a main line of over 2 km, a number of sidings and branch lines plus a large loco and stock depot area.. All this is located in the park of over 600 acres of woodlands and fifteen lakes, run by the rangers and staff of Warwickshire County Council. Click here to visit their website.

We are a non for profit organisation built and run by a dedicated group of volunteers who give of their time to continually maintain, repair and develop the railways facilities. This ensures the enjoyment of the over 30,000 passengers it carries each year and to provide an authentic and pleasurable railway for enthusiasts and supporters from all areas of railway interest. We should not forget the long suffering yet supportive wives and partners of members!

Not everyone on the railway drives or guards but, similar to a large scale railway, there are key duties which are undertaken from the Duty Controller (Thomas knows him very well!) and station staff to the yard controller and signalling staff. However, some of the most important staff are the EWR catering team who keep everyone fed and watered during the busy event weekends. Also the dedicated behind the scenes engineering team who are constantly looking after a very busy little railway.

Most of the locomotives you will see at EWR are privately owned by the members or from visiting loco owners. However, the society does own and run a number of diesel, petrol and electric engines with a comprehensive range of rolling stock of sit-a-stride and sit-in coaches.

As you would image with such a high number of passengers that safety is of prime importance at EWR. As such, all staff are trained in their various duties before being permitted to work with fare paying passengers. The railway has its own health and safety officer and works with the Warwickshire Health and Safety team to ensure the safety of our members and the general public. This includes a team of members who are first aid trained.

Throughout the year the railway holds special events, normally running for two or three days over a weekend or bank holiday. These events give the members and visiting loco owners the opportunity to run their locomotives of all shapes and sizes around one of the longest lines of its kind in the country.